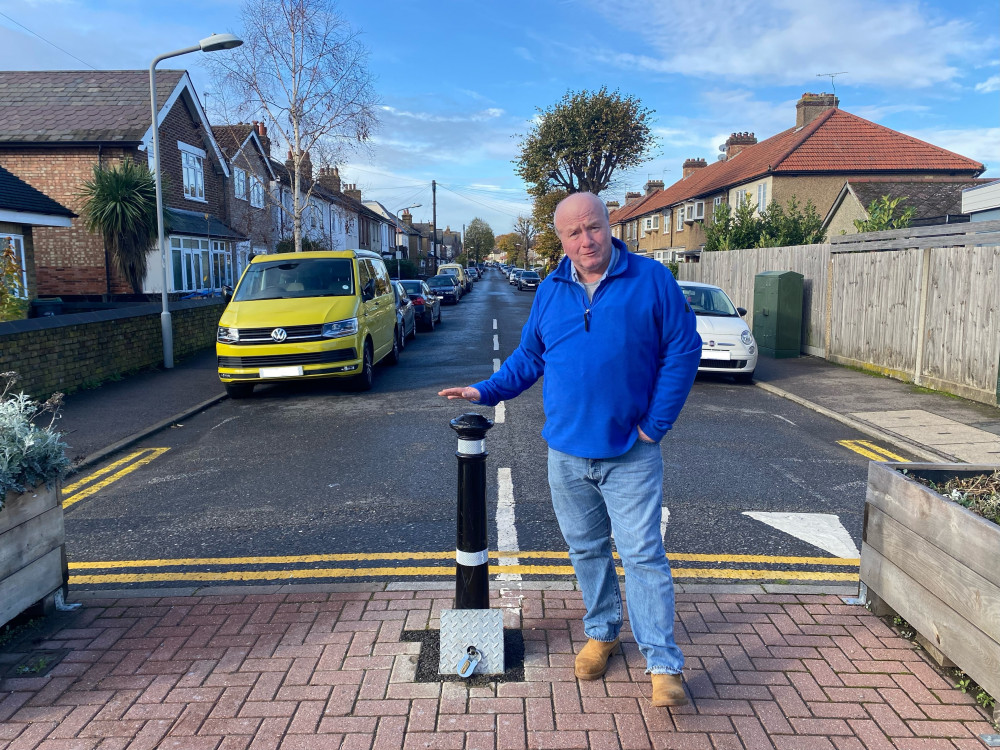 South Londoners are "utterly shocked" after a bollard that cost "more than £10,000 to install", is being removed by the council.

The obstacle – put in as part of a low-traffic neighbourhood project in Surbiton –  was used to stop cars driving down a rat run, however, it will now be taken away after residents living on nearby roads complained to Kingston Council.

Rory Dunn, 61, is gutted the bollard is getting ripped out from the road and said around 4,000 cars thundered past his home on Tolworth Road every day before it was introduced. He claimed drivers coming off the A3 used it as a rat run to get to Chessington. This fell to roughly 500 vehicles after the measure was installed following approval in January 2020, Mr Dunn said.

However, residents argued the scheme just moved traffic to other areas. As a result, councillors met in September to work out how to slash congestion on nearby Thornhill Road. Following a heated Surbiton neighbourhood committee meeting, in a shock move, it was decided the bollard scheme would be completely scrapped.

Mr Dunn blasted the U-turn as "rushed" at a scrutiny meeting on Thursday (November 24). Councillors said it was very difficult to fix the problems for everyone and rejected the grounds for the call-in.

Mr Dunn told the Local Democracy Reporting Service "there's a lot of sadness" on Tolworth Road and that the community had been "divided", with parents refusing to reveal what street they live on at the school gates. He said: "I'm utterly shocked at the way [the council has] handled it. People in power have to do unpopular things, I get that, it's just the way it was done."

Before the bollard was introduced, Mr Dunn said the street was plagued by drivers fighting outside their homes "all the time" due to congestion – "a lot of horn blowing and aggression" – along with noise disrupting their sleep and forcing them to keep their windows shut. He said: "Every single person on this road who I've talked to has had their cars damaged because of this."

He added: "If the traffic engineers came up with a scheme that means we have to have some pain, we're not unreasonable if there's a price we have to pay… but at the moment we're just the sacrificial lamb for everybody else."

The council forked out roughly £65,026 on initial reports for the low-traffic neighbourhood scheme, consultations, installing the bollard – at £10,400 – traffic surveys and officer costs, according to a Freedom of Information response obtained by Mr Dunn.

He said: "I'm campaigning to be able to walk down the middle of my road without getting run over out of self-interest, but it's absolutely scandalous that they've spent that much money and are just abandoning it."

Mr Dunn said residents "will book into every Surbiton neighbourhood committee to speak to the end of time until they do something".

The committee also voted in September to ban left turns from Fullers Way North onto Tolworth Road at peak hours – Mr Dunn claimed this traffic will go down Thornhill Road instead. The bollard will be removed in the next few weeks once the part-time ban is in place.

A spokesperson for Kingston Council said: "After listening to feedback on the trial from residents and others in the area the Surbiton neighbourhood committee took the decision to remove the barrier to motor vehicles in Tolworth Road.

"There have been concerns that the scheme is leading to more vehicle traffic in surrounding roads and, in an effort to address this, the council will now remove the 'at any time' closure while simultaneously introducing a 'no left turn' into Tolworth Road from Fullers Way North during peak hours only.

"In addition, a series of complementary measures will be introduced in streets such as Thornhill Road – which could include speed warning devices and priority markings – to discourage traffic from outside the local area from using these roads.

"The council will continue to monitor the traffic movements in this area and are in conversations with Transport for London regarding the slipway from the A3."

Kingston Charity launches Christmas fundraiser with donations made by residents set to be matched up to £3,000